Sowparnika has been a graduate student at the University of California, San Diego since 2009 and specializes in ethnoarchaeology of South Indian bronzecasters and bronzes. She is interested in exploring how value is created, sustained, modified, and perceived in objects, and the impact of spatiality and temporality in their contextualization. Her project is also tangentially related to digital visualization, aesthetics, gender, caste, class, and political, social, and cultural institutions.

Alicia is an anthropological archaeologist working in the Andes. Her research interests include complex societies, comparative studies, frontiers/borderlands, ideology, political economy, household archaeology, GIS, cultural heritage preservation, sustainable development, and ecotourism. Her dissertation project examines the coastal Chimu Empire’s (AD 900-1470) eastern frontier in the coca-growing zone of the Moche Valley. She is also a Project Director for MOCHE, Inc, a 501c3 NGO (Mobilizing Opportunity for Community Heritage Empowerment), http://www.savethemoche.org/. Alicia received her B.A. in history from the University of Michigan, Ann Arbor and her M.A. in anthropology from the University of California, San Diego. When she is not conducting fieldwork in the Andes with her Peruvian pup Beya, she is enjoying craft beer in San Diego.

James Daniels is originally from North Carolina. After completing his B.A. in anthropology at N.C. State University, James worked as an archaeology lab and field technician for a cultural resource management (CRM) firm in Chapel Hill working on several Woodland Period sites in the southeastern part of North Carolina. James earned his M.A. from California State University Long Beach. His Master’s thesis was an integration of geophysical data, artifact distribution, soil chemistry, and topographic data in an effort to detect subsurface structures and determine their function at the Classic Period site of El Baúl in Guatemala. After earning his M.A., James returned to the field of CRM and has been working as a Senior Archaeologist for San Diego firm. James research interest include the use of geophysical and remote sensing techniques including ground penetrating radar (GPR) and magnetometry, archaeometry, distributional archaeology, and GIS in concert with traditional archaeological methods to assess the archaeological record. His geographical regions of interest include Mesoamerica, Southern California, and the Southeastern United States.

Mikael Fauvelle received his B.S. in biology from the University of Washington and his M.A. in anthropology from California State University, Northridge. His research is focused on the role of long-distance trade and regional interactions in the development of complex political systems.  He addresses these issues through work on coastal chiefdoms in California, as well as with state-level societies in Mexico.  He has published articles on paleobotanical, ceramic, and lithic studies in both California and Mesoamerica. 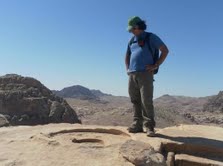 He is an archaeologist whose current work focuses on copper mining and smelting in southern Jordan during the Middle Islamic period (ca. 1000-1400 AD), primarily at 13th century Khirbat Nuqayb al-Asaymir in the Faynan district. His interests include production systems and exchange, the daily lives of laborers, the interaction of state and local interests in Middle Islamic Jordan, and Islamic period ceramics. He is also an IGERT-TEECH trainee in the CISA3 research group at Calit2, where he works on a project investigating the applications of satellite remote sensing and GIS to the archaeology and cultural heritage of Jordan.

Beth Plunger is a Ph.D. student focusing on archaeology. She started her graduate work at the University of California, San Diego in 2007, and received her non-terminal M.A. Degree in 2009. She achieved Ph.D. candidacy in 2011. Her dissertation research concerns the use of clothing in the construction of gender roles, dynamics, and relationships. She is especially interested in the socialization of children and adolescents into gender roles. She investigates this through analysis of burial garments interred with individuals from the Tiwanaku culture. The Tiwanaku (AD 500-1000) were a pre-Inca polity whose influence ranged throughout the central Andes of South America.

Matthew Sitek received his B.S. in Archaeological Studies from the University of Wisconsin, La Crosse in 2010. He entered the Ph.D. program at University of California, San Diego in 2011 where he obtained his M.A. in 2013. His areas of specialization are: Andean Archaeology: the Middle Horizon and Tiwanaku (A.D. 500-1100), household archaeology, the built environment and architecture, ceramic studies, world systems and network studies, complexity theory, and the development of complex societies.

In 2016, Luke Stroth left the cornfields of the Midwest to enter the UCSD graduate program in Anthropology, focusing on Anthropological Archaeology. His interests include archaeometry, lithic technologies, craft production and economic exchange. His current research is a description of the lithic assemblage of a Postclassic Site on the north coast of Honduras. This relatively understudied region is placed between southern Mesoamerica and Lower Central America. Recent work has been done to show how local development and identity articulate with foreign influences. Analysis of the assemblage reveals how a Mesoamerican lithic tradition is modified by local raw materials and technological choices. He has previously worked on Midwestern lithic and hot-rock technology, and excavated in Iowa, Belize, Peru, South Africa, and Chiapas. He received his B.A. from the University of Iowa in 2016 and will receive his M.A. from UCSD in Spring, 2018.

Matthew is a graduate student who has been working in Jordan since 2004. He has worked at sites such as Tall al-‘Umayri, Tall Jalul, Khirbat al-Balu’a and more recently Khirbat Faynan. With experience in several of the primary ancient Transjordan Kingdoms, Ammon, Moab, and Edom, he is interested in the relationships of these various kingdoms with each other. Matthew has been the GIS and database specialist at ‘Umayri since 2008, and recently assumed the role of assistant director at Khirbat al-Balu’a. His future research will focus on the application of database technologies for archaeological research and cultural heritage conservation. One application of this research will be directed toward ceramics and using databases and technology to understand broader social questions relating to these three Transjordanian polities.